On a way to become a member of European Union Serbia faces lots of demands from Brussels, including total liberalization of Serbian law system towards homosexuals.

It is not enough that Serbia today have, with Scandinavian countries, one of the most protective system to LGBT persons, but they demanding from 2008 to have right for public manifestations to promote homosexualism in Serbia (παρέλαση ομοφυλοφίλων), although majority of Serbians are scandalized with that.

Serbian Government is now under pressure from West to allow it, although last years there was hundreds of injured people in clashes on Belgrade streets between policemen and conservative Serbs, and although vast majority of Serbians are against it.

The patriarch says the "tragicomic parade of shame" casts a heavy moral shadow on Belgrade, on Serbia's longstanding Christian culture and the dignity of the family, as the basic unit of humanity.

Commenting on the exhibit, which has stirred a lot of debate in the public, the patriarch said it was "deeply insulting."

"I had not expected that this year I would again be forced to turn to you on behalf of the Serbian Orthodox Church, its members, who are the dominant majority in Serbia, and on behalf of numerous members of other religions, with the plea and demand that, by your authority as prime minister, you prevent the scandalous exhibit of photographs by Swedish artist Elisabeth Ohlson Wallin," Irinej wrote.

The parade is scheduled for October 6 in Belgrade, while the opening of the controversial exhibit dubbed "Ecce Homo" should take place Wednesday night at the Center for Cultural Decontamination.

The Serbian political party Dveri has announced that it will file charges against the organizers of the exhibition for inciting national, racial and religious hatred and intolerance. The movement believes that the manifestation is aimed against traditional religions and religious communities.

Dveri will also file charges against the Center for Cultural Decontamination and it will set up stands where its activists will hand anti-gay leaflets to citizens.

Despite announcements, the Pride Parade organizers still have not been officially informed that the event will be banned.

Member of the Pride Parade Organizing Committee Goran Miletić says that the organizers respected the authorities’ decision to ban the parade in the previous years but that they “will not just sit” this year. He added that they would take certain steps if the parade was banned.

Serbia’s Prime Minister Ivica Dačić has stated that the parade will be banned if security risks were too high. He told B92 that the police could, with the use of water cannons and firearms, enable the holding of the Pride Parade but that he was not ready to allow the holding of the event if the cost was the loss of many lives.

Democratic Party (DS) leader Boris Tadić has supported the holding of the parade. According to announcements, Swedish European Affairs Minister Eva Birgitta Ohlsson, who will visit Belgrade on October 5-6, will also participate in the parade.

All eyes on Serbia ahead of gay Pride Parade
October 3, 2012

BELGRADE -- EU Commissioner for Home Affairs Cecilia Malmstrom has supported the Belgrade gay Pride Parade that should be held on October 6.

She stressed that “all eyes are on Serbia this week”.

Malmstrom said that homophobia in Europe should be treated as a serious problem.

The EU commissioner stressed she hoped that the Pride Week, that started on Monday, would end with a walk on Saturday despite “fears that the gathering will be banned”.

She noted that the Pride Parade organizers were “very brave”.

She also commented on the rights of the LGBT community in Europe, stating that systematic work was necessary in order to “get the right through to the society’s consciousness”.

The Belgrade authorities still have not decided whether the Pride Parade will be held on Saturday.

The scandalous exhibition dubbed Ecce Homo which insults Jesus Christ should be opened today. Political party Dveri has announced that it will file charges against the organizers of the exhibition for inciting national, racial and religious hatred and intolerance. The movement believes that the manifestation is aimed against traditional religions and religious communities.

In front of Saint Sava church 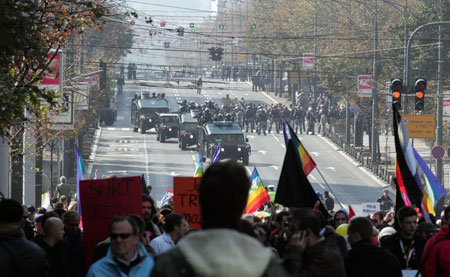 Did they do well to try to stop them from parading??

In other words , what do you think would be better, .... to let them do whatever .... with respect to the people arround (in a good manner)
or to stop them all ,from doing such things.....or whatever?

Did they do well to try to stop them from parading??

In other words , what do you think would be better, .... to let them do whatever .... with respect to the people arround (in a good manner)
or to stop them all ,from doing such things.....or whatever?

BELGRADE -- A photo exhibition by a Swedish artist was opened in Belgrade on Wednesday causing a heated public debate over the way it portrays symbols of Christianity.

Elisabeth Ohlson Wallin's Ecce Homo caused the same stir in other countries where it had been shown, Tanjug reported.

The exhibition was organized as part of Belgrade Pride Week, an event gay activists use to draw attention to the rights of the LGBT community. The opening was accompanied by high security, since the political party Dveri announced a counter-rally nearby.

The whole block around the Center for Cultural Decontamination venue, where the exhibition was held, was closed off by thousends of riot police two hours before the event started. The police only let through those who live there, people with invitations to the exhibition and reporters.

Member of the Pride Parade organization committee Boban Stojanović addressed the visitors at the opening of the exhibition, greeted them on behalf of the artist and read an open letter to Prime Minister and Interior Minister Ivica Dačić, which, as he said, had been inspired by Serbian Orthodox Patriarch Irinej's public address that morning.

There are 12 photographs at the exhibition mimicing classical works of art and portraying Christ as a homosexual. The exhibition will be closed on Wednesday evening, and only about a hundred invited guests will have an opportunity to see it.